Our trip began with lunch in Point Reyes Station, a tiny town that embodies the word quaint. Our meal of local oysters, cheese, and beer was excellent, but we didn’t quite feel like hiking at that point. Nevertheless, we headed to the tip of the Point Reyes peninsula, Tomales Point. We set out on the 10 mile Tomales Point trail, which was busy with hikers. Within 15 minutes of starting, we came upon this great view: 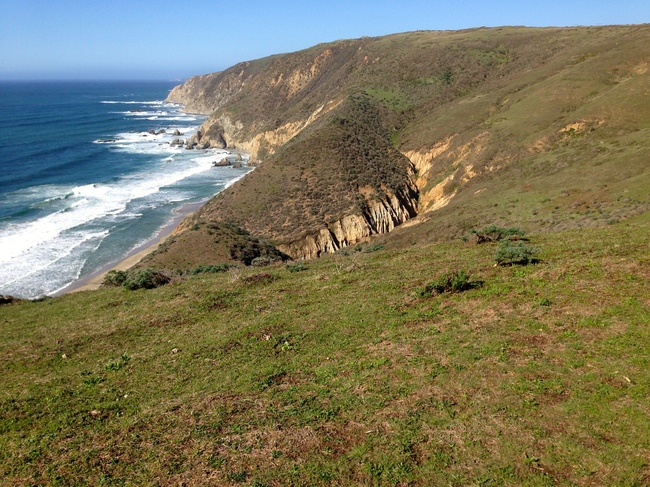 There were these types dramatic cliffs throughout the trail, along with the green, rolling hills. Every so often we would also see groups of Tule Elk, a special type of elk that were protected on a preserve that encompasses Tomales Point. It was extremely surprising to turn a corner and see a group of huge elk with enormous antlers, something I would expect to see in Yellowstone. I still can’t believe that these elk live here, not even an hour away from San Francisco. Here’s my sad attempt at photographing the elk without optical zoom: 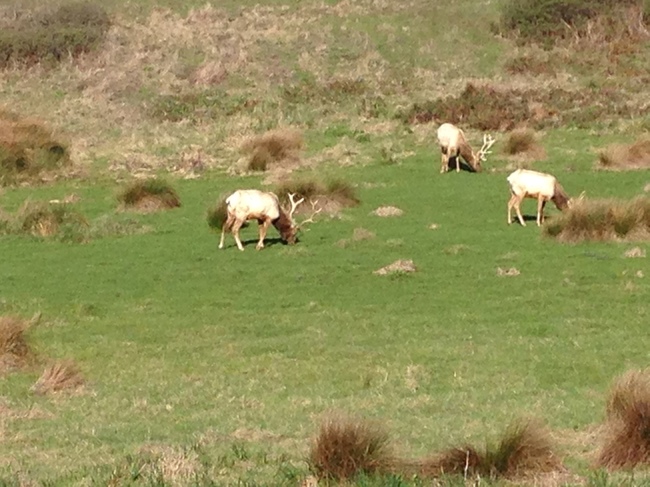 We continued along rolling hills for five miles and made it to the end of Tomales Point where we stopped for a snack. We trekked back to our car, and then took a quick trip to McClures Beach to catch the sunset. It was perfect. 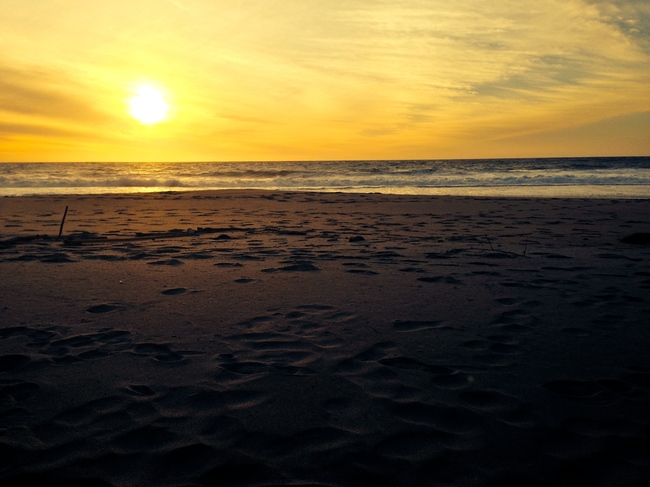 Then we returned to Point Reyes Station to grab dinner, and then set off to our trailhead. We found ourselves yet again on a dark mountain road, hiking into the darkness to a campground. After an eery mile, my friend and I reached Sky Camp and quietly set up our tent.

I woke up early the next morning and was able to see the moon setting as the sun was rising. Sky Camp had a very nice view from the top of the mountains, and it was a beautiful, tranquil place early in the morning. We hiked back to the car and then drove to a nearby trailhead to set out on our next hike. Starting near a hostel, we hiked along the Coast Trail for about 6.5 miles. The scenery was familiar: rolling hills and dramatic cliffs, but this time we were surrounded drier habitats, access to the beach, and deer instead of elk. There were far fewer people along this trail, and it was refreshing after our previous day. 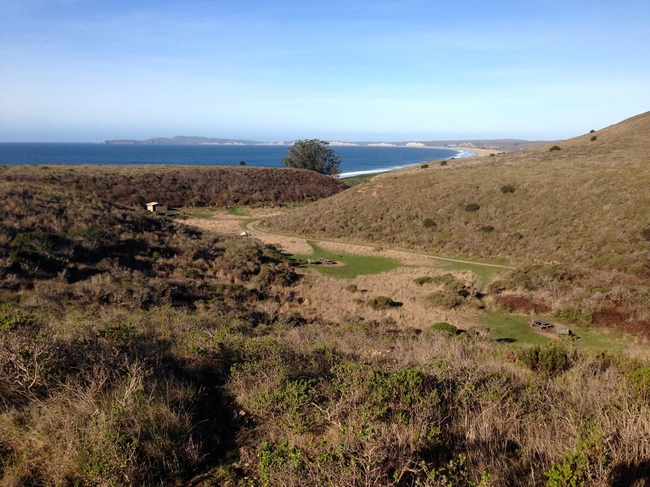 Our destination for this hike was Arch Rock, but when we reached it we were slightly underwhelmed. It could be possible that we overhyped the landmark in our minds while we hiked, but we also didn’t get the best view possible of the arch. I think if we hiked another half mile past the rock we could’ve had a view of the actual arch. It’s alright though, that’ll leave something to look forward to on the next trip. We didn’t end up seeing the actual arch, but we did walk out onto this dramatic piece of cliff. 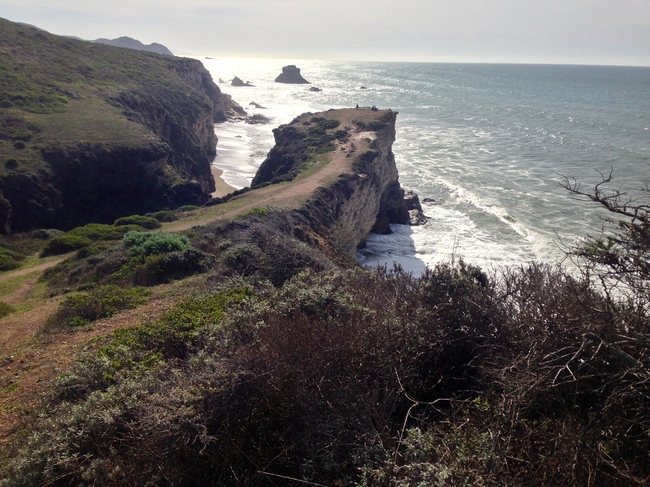 It turned out that sights along the hike to the arch were more interesting than the arch itself. Along the way we walked through tree tunnels, saw many deer hopping through the brush, found a small waterfall that crashed onto the beach, almost stepped on a snake, and found some weird prickly fruit. The hike was an out-and-back trip, so we quickly trekked back to our car.

Our next stop was the VERY popular lighthouse. We parked at the visitor center and rode the shuttle bus to the lighthouse along with many other tourists. I wasn’t expecting much, but I stepped off the bus and immediately saw this amazing view: 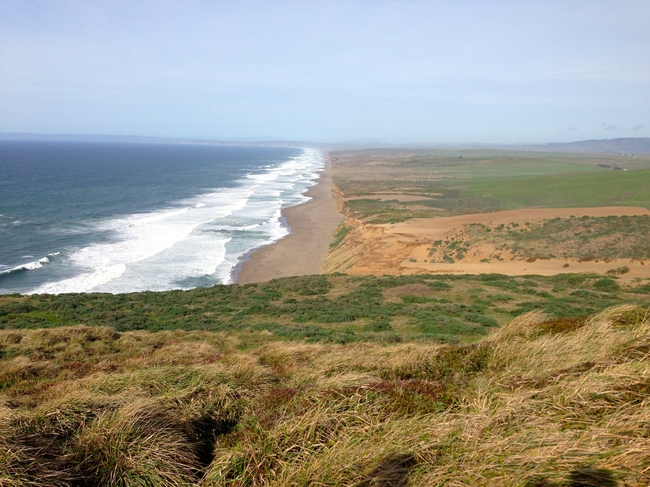 There were waves breaking for miles and miles. In the hazy distance was Tomales Point that we visited the day before. Pictures really don’t do it justice. After gaping at the view for a while, we walked over to the cliff and down to the lighthouse. It’s an amazing spot, and you really feel like you’re dangling over the ocean. 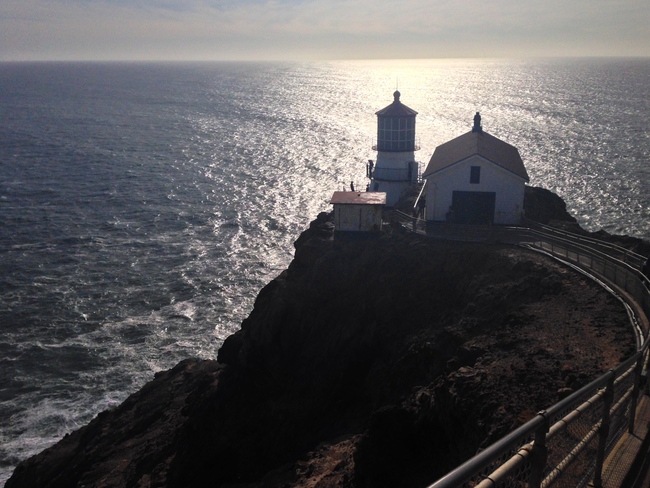 We hopped on the bus again and rode to Chimney Rock. After a short hike, we were rewarded with more amazing landscapes. It’s how I imagine Ireland is like: 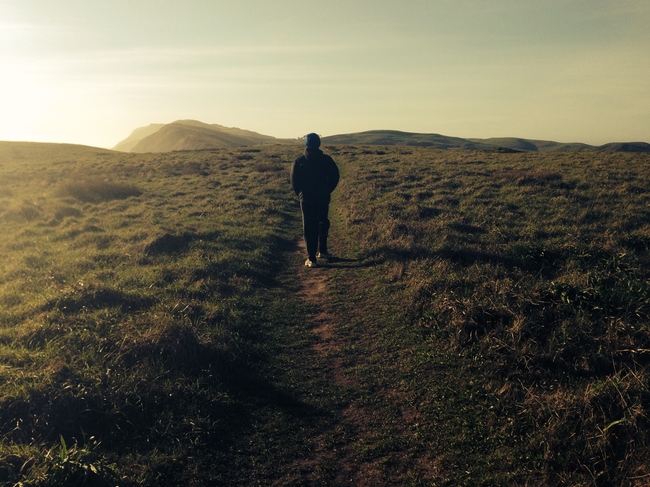 Just awe-inspiring. That was the end of the trip, but I’m sure that I’ll be visiting again.

a quick trip to Yosemite in winter, with a rigorous day hike The picture below shows the view from Lower Yosemite Falls, but the main hike that my friends and I tackled was the trek to Nevada Falls. (This photo makes a nice phone... Continue →